Tecno Camon C9 is the new brainchild of Tecno Mobile. It was made to disrupt the dominance of Infinix Mobility in Africa.

In line with popular opinion, Tecno Mobile is probably the most disruptive mobile phone brand in the market and well known for their periodic mind-blowing upgrades on mobile specifications.

They have done this again in their latest revelation, the TECNO CAMON C9, which flaunts dual 13.0MP high definition low-light cameras and the company’s first eye scanner technology.

The Camon C9, the new brainchild of Tecno mobile, has been labeled the best selfie phone in the world.

It is being compared to the iPhone 6s Plus and the Samsung s6 edge in terms of picture quality.

Now, potential customers and fans of the brand will finally get to know what’s in the offering.

Although this device has since been overtaken by the Tecno Camon CM and Tecno Camon CX Air, there is still so much to love about the device.

Sit tight, there is much to learn in this review.

After several months of anticipation, the TECNO C9, which flaunts a dual 13.0MP high definition low-light cameras and the company’s first eye scanner technology, was finally launched on June 17, 2016

The  TECNO CAMON C9 smartphone is an upgrade to its predecessors CAMON C8 and C5 respectively which were released in the second quarter of 2015.

The smartphone, as you would expect, is beautiful, sleek and slim; you won’t find a better all-rounder.

The ultra slim body is made of metal frame built around a leather textured curvy plastic body unlike the blocky candy bar design associated the C8.

It sports an aesthetically pleasing plastic body(Dimension: 153*76.4*10.35mm) which comes in various colors including black, white and gold.

The 3.5mm earphone jack is at the top, while the micro-USB port is at the bottom. 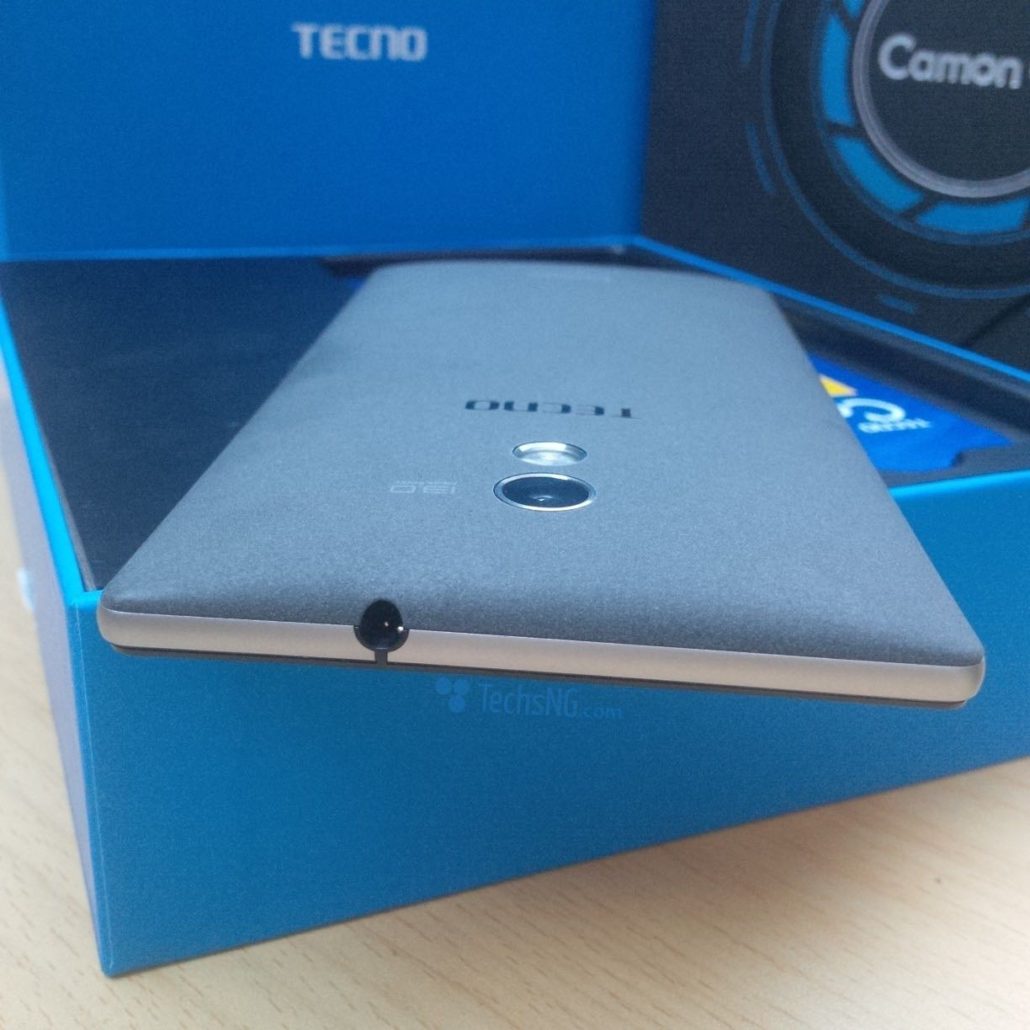 At the top of the front side is the front camera ( a whopping 13 megapixels) with a speaker grill just above it. 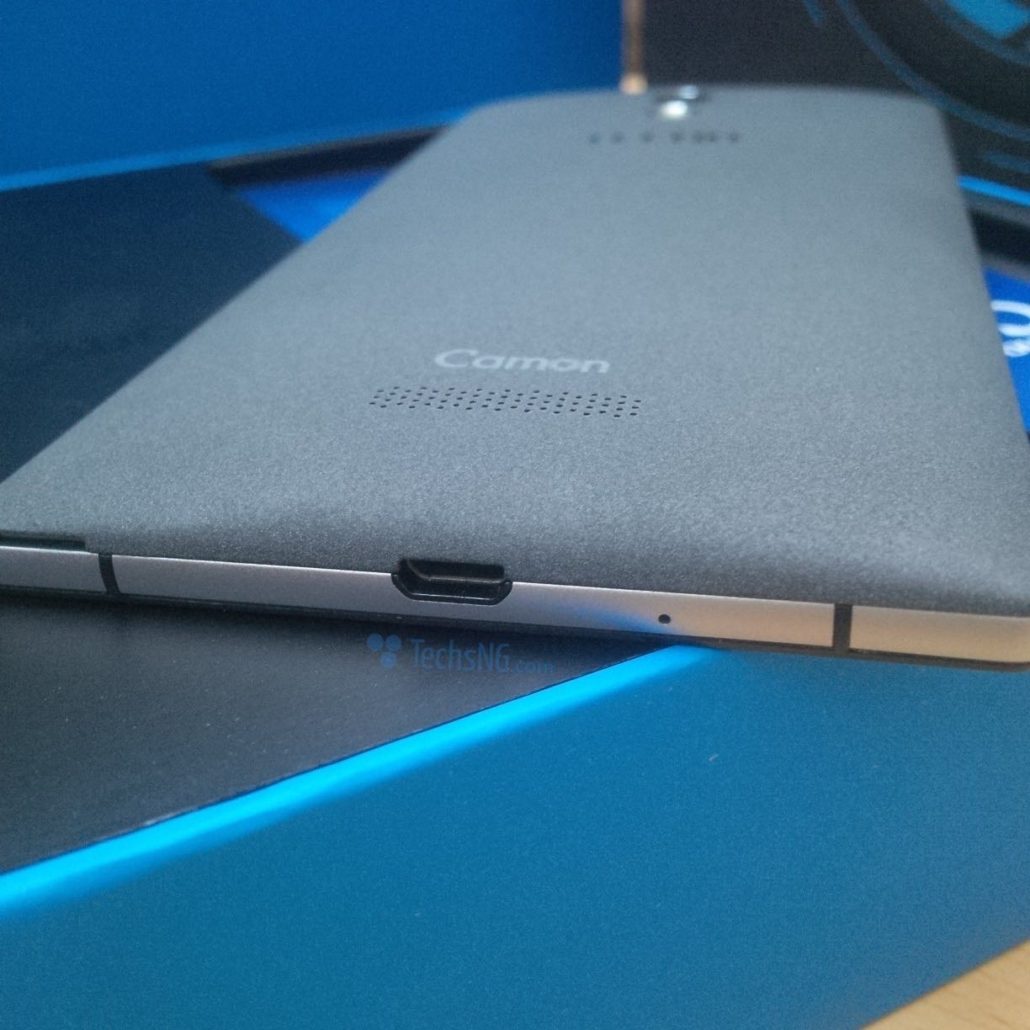 On the flip-side, there’s a 13MP camera with flash underneath and the speaker at the bottom.

Like the Phantom 5, the Tecno Camon C9 also has a fingerprint recognition sensor embedded below its rear camera.

This fingerprint sensor has one of the fastest response time and false rejection rate compared to some high-end devices, with little or no error margin.

In real life use, this is pretty true and the accuracy of the sensor has a score of about 98%.

The volume and power keys are located on the right side of the phone and there is also a shutter button close to the bottom of the right side. 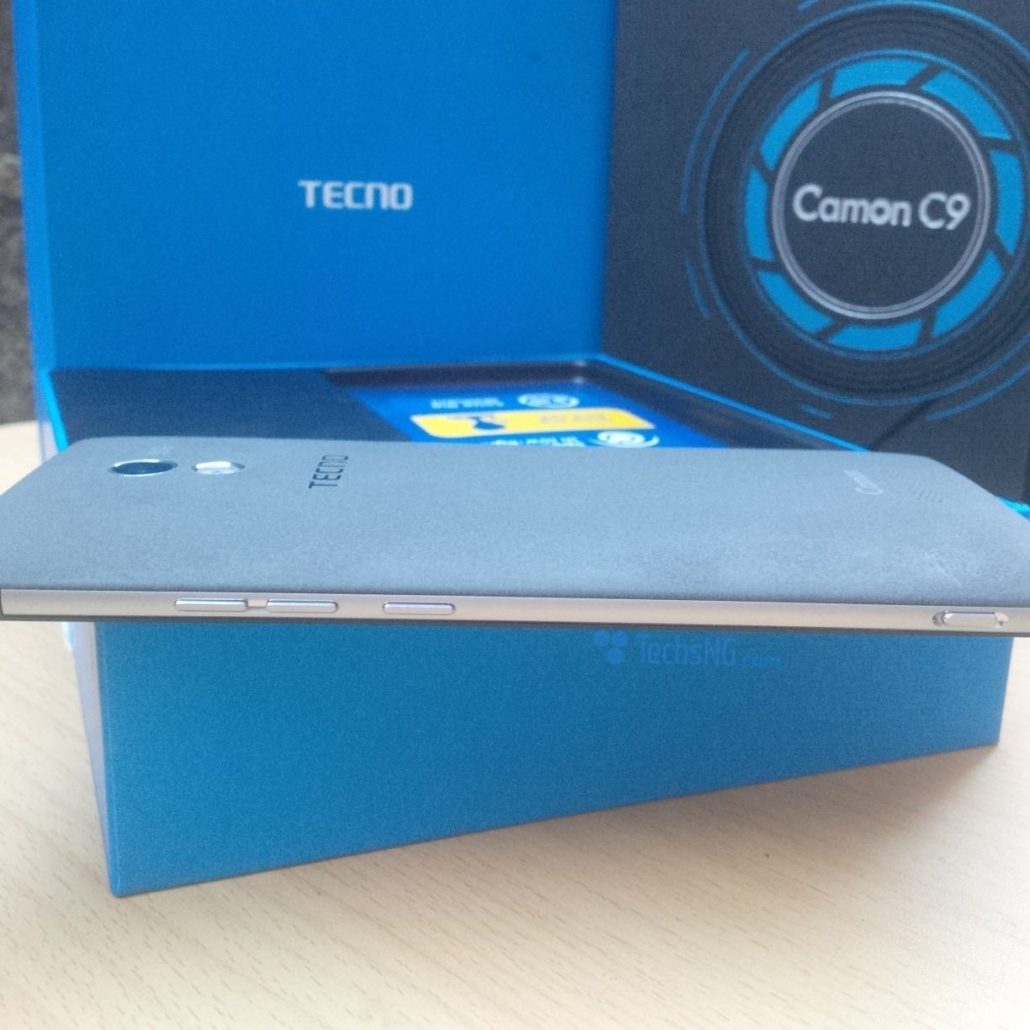 This build makes it slimmer and lighter than the Camon C8. Hence it is easier to hold, carry about, operate with one hand and slide into a pocket.

You have the opportunity to choose from a myriad of colours champagne gold, sandstone black and pearl white. Cool!

It is massive but holding it in one hand is not too much of a struggle.

This is great news for slippery hands like myself since this device can survive more falls, impacts, and hits before it finally gives way.

Another exciting feature of the smartphone is the  Full HD screen, with a pixel density of 404 PPI, which is more than the human eye (300PPI) recognizes.

This phone is very close to a portable smart TV.

The phablet has an octa-core Mediatek processor running at a speed of 1.3GHz with an improved 2GB of RAM – built to give you a smooth multitasking.

It ships with 16 GB internal memory and an expandable Micro SD slot, up to 128GB.

This is more than enough to carry out all your day to day activities and still have enough left for some videos.

The Tecno Camon C9 runs the latest version of Android software, the Android 6.0 Marshmallow, out of the box.

The Os is customised to use Tecno’s User Interface, HiOS V1.0.

This is similar to other smartphone brands including Samsung’s Android user interface- Touchwiz & Huawei’s Emotion UI.

This customised Interface is meant to provide a personal and user-friendly experience.

You get to organise your display screen as you please and choose the preferred site wide theme for your device.

This is another selling point of the Tecno Camon C9 with its 3,000mAh battery.

Tecno claims you don’t need a power bank for this smartphone due to its efficient Ultra Power Mode.

This will allow the user to takes up to 75,000 Photos continuously, Plays Videos up to 6.5 Hours continuously and standby time can of up to 200 Hours.

This technology is almost equivalent to a military mini computer. Cheers!

The best moments in life are often spontaneous and unplanned.

Our ability to capture these moments in detail in its full glory and color is the essence of quality living.

The CAMON C9 is the epitome of this fact as it features a camera smartphone that literally allows users to capture time with every click of the shutter button.

The quality of the camera on both sides is the same as a professional camera and if you love photographs, you must choose the Camon C9.

The CAMON C9 is the ultimate camera smart phone that literally allows users to capture time with every click of the shutter button.

The quality of the camera on both sides is the same as a professional camera and if you love photographs, you must choose the Tecno Camon C9.

The C9 mounted camera module features 13 megapixels on both front and back camera with advanced noise reduction technology and automatic portrait beauty treatment. 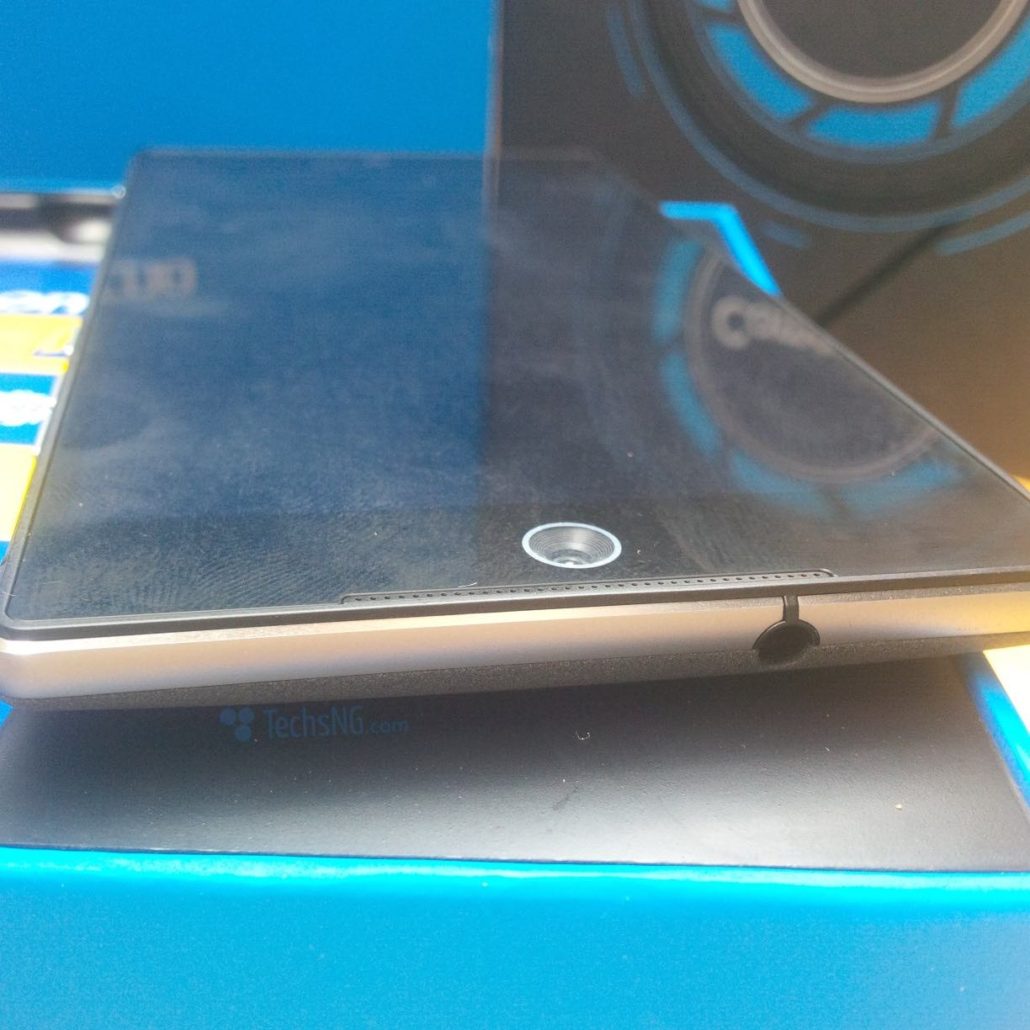 The front camera takes 120° panoramic view and can shoot 10 people together.

In fact, the camera’s sensitive area is 15% wider than that on iPhone 6s Plus and 35% than Samsung S6 edge. You need to try out this cool camera to understand why I am so excited about these figures.

You need to try out this cool camera to understand why I am so excited about these figures.

There are 8 makeup styles for transforming and beautifying pictures. 6 options are provided to edit pictures, including filter, rotating, cutting, blurring, moderating and mosaic.

And there is a powerful night mode that enables you to take vivid and bright photos at night.

Just like the Iphone 6, the camera abilities of the Tecno Camon C9 enables it to enhance photos automatically and create professionally retouched images.

Forget Siri, or any other form of voice recognition.

When it comes to locking security to the fullest nothing compares to the Eyeball Unlock that C9 has to offer.

The C9 is equipped with the latest eyeball recognition technology to encrypt or unlock your phone, security performance comparable to national security or James bond, thousands of times without a recognition error for your mobile security escort.

As would be expected, the device has dual SIM card slots.

It also offers 4G connectivity with download speeds of up to 28 Mbps. 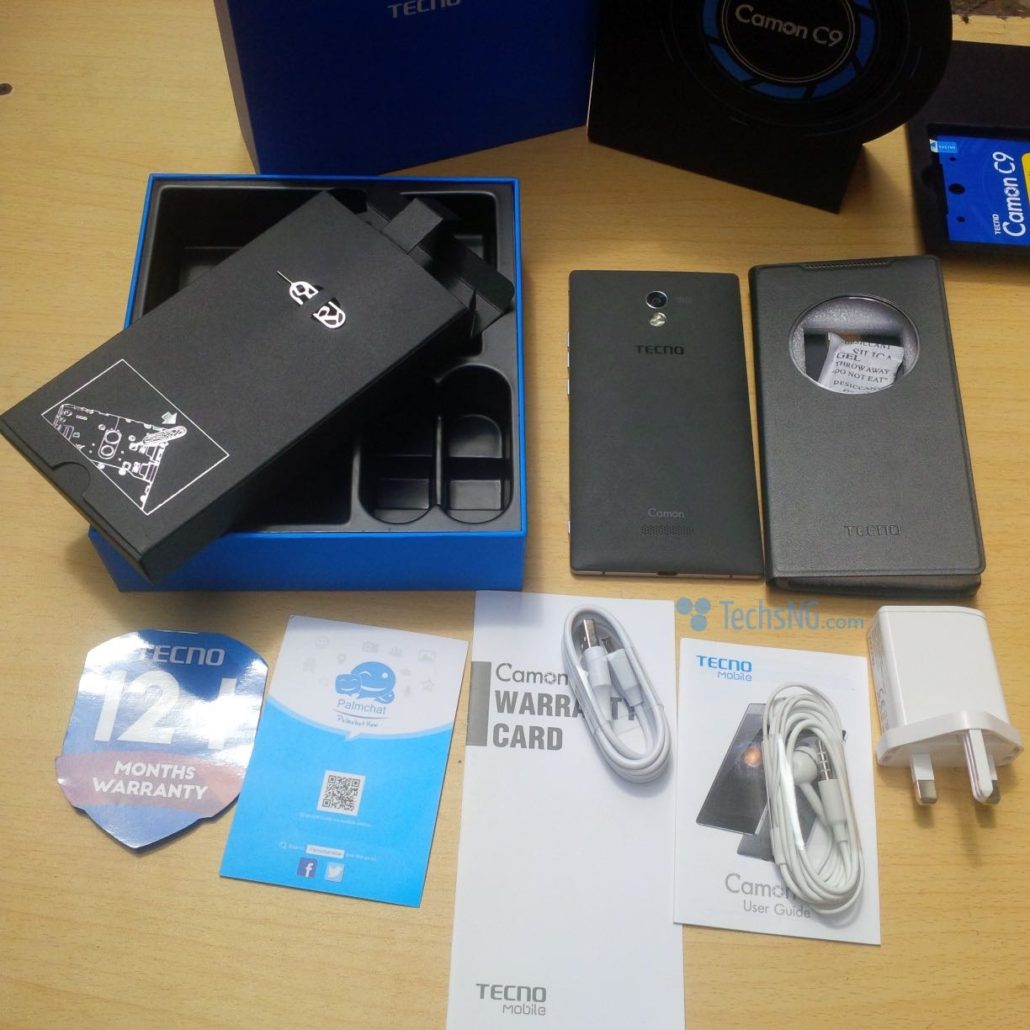 Below is a summary of the Tecno C9  features:

Remember the Tecno Boom J8, one of the hottest selling music phones in the market.

And now, we have Tecno Camon C9, the best camera phone in the world. What a coincidence?

So, the Tecno Boom J8 Vs Tecno Camon C9 ? Which of these Phones should you buy?

The price of Tecno Camon C9 in Nigeria ranges from N49, 000 to N55, 000 depending on where and when you purchase the smartphone.

It is also available on leading online stores in Kenya and should cost no more than KSh 20,000.

Tecno mobile is here to take the market by storm with this timely and mind-blowing upgrade on the Tecno Camon series.

It will be difficult for both Tecno fans and haters to deny that the new Tecno Camon C9 is a selfie beast.

Want to join the discussion?
Feel free to contribute!